Two 1920s apartment and retail buildings located two blocks apart in the VCU area were both sold on the same day last week for more than $ 4 million.

The 1510 Lofts apartment building at 1510 W. Broad St. was sold on July 21 for $ 4.68 million. The buyer for the 28,800 square foot structure, which also houses a Dollar Tree, was Thalhimer Realty Partners, the investment and development arm of Cushman & Wakefield | Thalhimer.

On the same day, the 32,400 square foot Iron House apartments at 1311 W. Broad St. were sold for $ 4.25 million to Richmond-based Levco Realty Group. The seller was Genesis Properties, a local developer who bought the building in 2006 for $ 1 million.

Matthew Raggi, vice president of Thalhimer Realty Partners, said the purchase adds the building’s 17 apartments and 11,000 square foot commercial space to Thalhimer’s VCU portfolio. The company had tracked the property, which it said had been listed more than once in recent years.

â€œWe have several hundred units in the immediate vicinity, a few blocks from this property, so these are just economies of scale,â€ Raggi said. â€œOur management office is one block away, so we’ve seen operational and management benefits. And we obviously liked the location, considering it’s Broad Street and VCU and growing.

Raggi said the Dollar Tree was in the middle of a “semi-long-term” lease that Thalhimer would continue to honor with renewal options. He said the retail space will remain a valuable asset if Dollar Tree decides not to renew in the future.

Raggi said no changes are planned for the apartments. A 770 square foot two-bedroom unit was recently rented for $ 1,200 per month.

She also manages Osprey Lofts and Courtyard Lofts at Scott’s Addition, and recently took over management of the Argon Apartments on Cutshaw Avenue which were recently sold to an out-of-town buyer. Other properties include the recently purchased 2001 East Apartments in Church Hill. 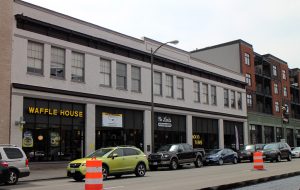 Just east of 1510 Lofts across Broad Street, the 35-unit Iron House Apartments are the latest addition to Levco’s downtown portfolio and its sixth multi-family residential property purchase in the VCU area since 2013.

This is also the company’s second zone purchase from Genesis Properties, which sold Levco the Ram Cat Alley Apartments at 111 W. Marshall St. – renamed District Square Apartments – in 2016 for $ 5.7 million. of dollars. The year before, Levco bought the Grace and Monroe apartments in Monroe Ward for $ 6.4 million.

Like the Grace and Monroe property, Levco’s principle Jared Levin said, the Iron House building was not actively listed for sale. He said he and his colleague Max Comess knew the owner well and approached him to sell.

Tom Rosman of One South Commercial represented Genesis Properties in the negotiations.

â€œThis will be our sixth property that we have acquired in VCU in the past four years, so we are very comfortable with the market,â€ said Levin. â€œWe absolutely love the Broad Street corridor right nowâ€¦ It was a great opportunity to acquire a great location right across from the Siegel Center.â€

A recent municipal assessment valued the Iron Hill property at $ 3.97 million. The building consists of 35 apartments averaging 700 square feet and rents from $ 800 for a one-bedroom unit to $ 1,800 for a three-bedroom unit. The building also includes 5,400 square feet of retail space currently occupied by a Waffle House, No Limits Nutrition, Good Times and Ronncutts Barbershop.

Levin said they plan to improve the building’s facade and renovate the common areas, and he said the apartments will be modernized with new lighting fixtures and counters.

Based on West Franklin Street, the VCU area is Levco’s largest concentration of apartments, although Levin said she also owns properties elsewhere in the Richmond Underground and Hampton Roads.