The state Communications and Information Special Protection Service warned that the blast, which it said resembled a mushroom cloud, could cause an “environmental disaster” and advised residents to cover their windows with a damp cloth or gauze and drink plenty of fluids.

Huge explosions lit up the pre-dawn sky south of Kiev early on Sunday. One of the explosions occurred near Zhuliany airport and the mayor of Vasylkiv, about 25 miles south of the capital, said an oil depot had been hit.

The city of 1.5 million people is located 25 miles from the Russian border.

Ukrainian soldiers look out of a shattered window inside a military installation, after an explosion in Kiev (Emilio Morenatti/AP Photo)

The United Nations says it has confirmed at least 240 civilian casualties, including at least 64 people killed, in fighting in Ukraine that erupted since Russia invaded on Thursday – although it believes the ‘true numbers are considerably higher’ as many casualty reports remain to be confirmed.

The United Nations Office for the Coordination of Humanitarian Affairs (OCHA) relayed on Saturday evening the count of the United Nations human rights office, which has strict methodologies and verification procedures on the conflict toll.

OCHA also said damage to civilian infrastructure had deprived hundreds of thousands of people of access to electricity or water, and produced a map of “humanitarian situations” in Ukraine – mainly in the north, eastern and southern Ukraine.

The human rights office had reported on Friday morning a first count by its staff of at least 127 civilian victims – 25 people killed and 102 injured – mainly as a result of bombardments and air strikes. Skirmishes have broken out on the outskirts of Ukraine’s capital as the country’s president has vowed to keep fighting a Russian invasion that has led his people to seek safety underground.

The Russian assault on Kiev has led to the announcement of a curfew in the city, which is expected to last until Monday morning.

Even when journalists were forced inside, the relative calm of the night in Kyiv was sporadically interrupted by gunfire.

President Volodymyr Zelensky promised to “fight as long as necessary to liberate our country”, while continuing to press for additional international aid.

The fighting on the outskirts of the city suggests that small Russian units are trying to clear a path for the main forces.

Small groups of Russian troops were reported inside Kyiv, but the UK and US said the bulk of Russian forces were 30 km from the city center on Saturday afternoon.

Russia says its assault on Ukraine is aimed only at military targets, but bridges, schools and residential areas have been hit since the invasion began on Thursday, with airstrikes and missiles and Russian troops entering Ukraine from the north, east and south.

It is unclear whether these figures include both military and civilian casualties.

In Kyiv, a missile struck a high-rise building in the southwestern outskirts near one of the city’s two passenger airports, leaving a jagged hole of ravaged multi-storey apartments.

Mr Zelensky reiterated his openness to talks with Russia in a video message on Saturday, saying he welcomed an offer from Turkish and Azerbaijani leaders to stage new diplomatic efforts.

It came a day after Mr Zelensky offered to negotiate a key Russian demand: that Ukraine abandon its ambitions to join NATO. 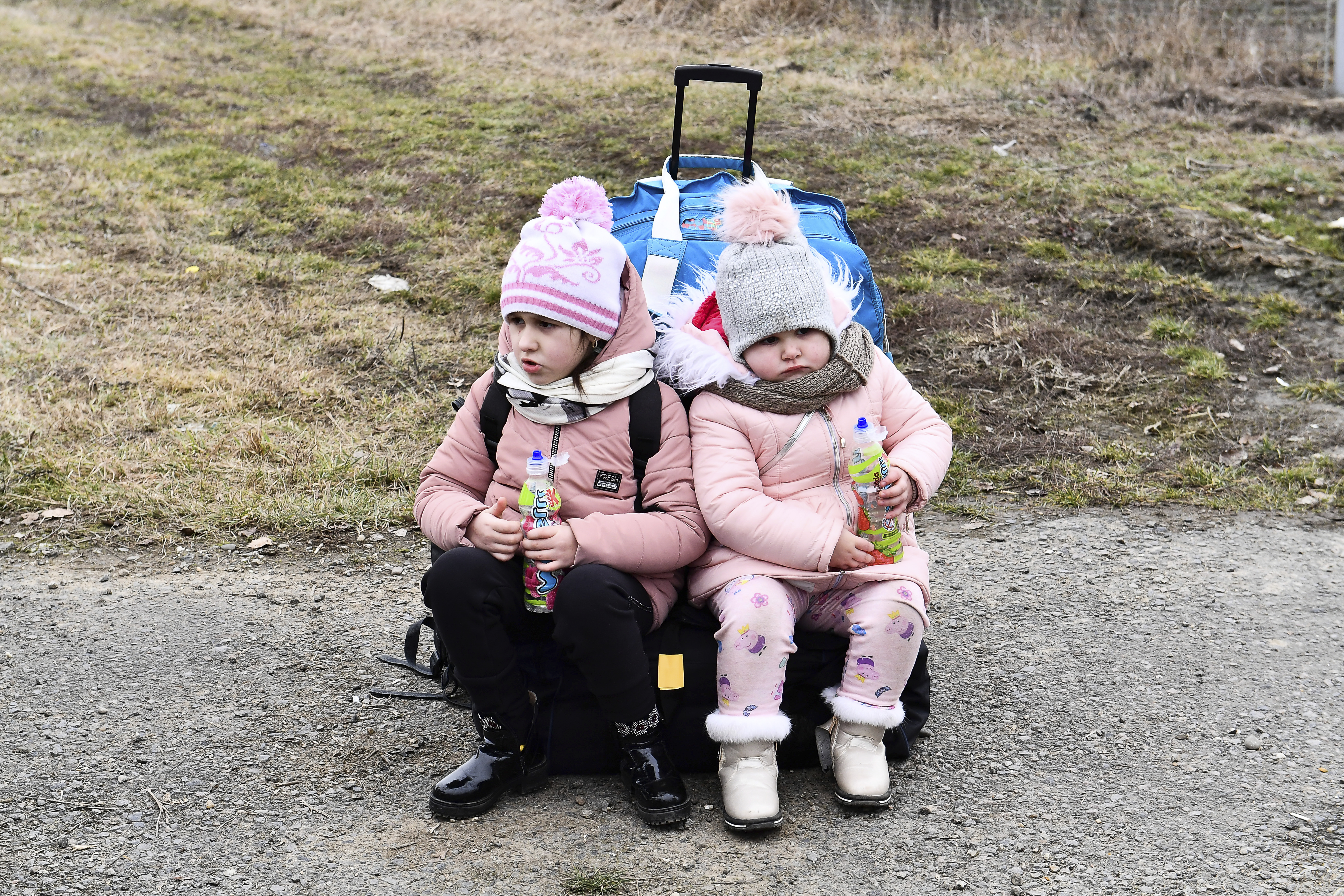 Sisters wait at a checkpoint run by local volunteers after arriving from Ukraine, crossing the border in Beregsurany, Hungary (Anna Szilagyi/AP)

Russian President Vladimir Putin sent troops to Ukraine after spending weeks denying that was his intention, while building up a force of nearly 200,000 troops along the countries’ borders.

He says the West has not taken Russia’s security concerns about NATO, the Western military alliance that Ukraine aspires to join, seriously. But he also expressed his contempt for Ukraine’s right to exist as an independent state.

Mr Putin has not revealed his ultimate plans for Ukraine, but Western officials believe he is determined to overthrow the Ukrainian government and replace it with his own regime, redraw the map of Europe and revive the influence of Moscow during the Cold War era. 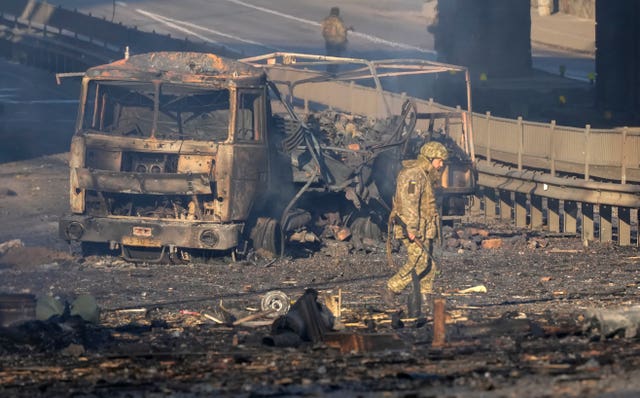 A burned military truck on the street in Kiev (AP)

A senior US defense official said more than half of the Russian combat power that was massed along Ukraine’s borders had entered Ukraine and Russia had had to commit more fuel supplies and other units support inside Ukraine than originally planned.

Ukraine’s infrastructure ministry said a Russian missile was shot down before dawn on Saturday as it headed towards the dam of the vast water reservoir that serves Kiev, and Ukraine said a military convoy Russian had been destroyed near the town early on Saturday.

Footage shows soldiers inspecting burnt-out vehicles after Ukraine’s 101st Brigade reported destroying a column of two light vehicles, two trucks and a tank. The request could not be verified.

Highways leading into Kiev from the east were dotted with checkpoints manned by uniformed Ukrainian soldiers and young men in civilian clothes carrying automatic rifles. Low-flying planes patrolled the skies, but it’s unclear whether they were Russian or Ukrainian. 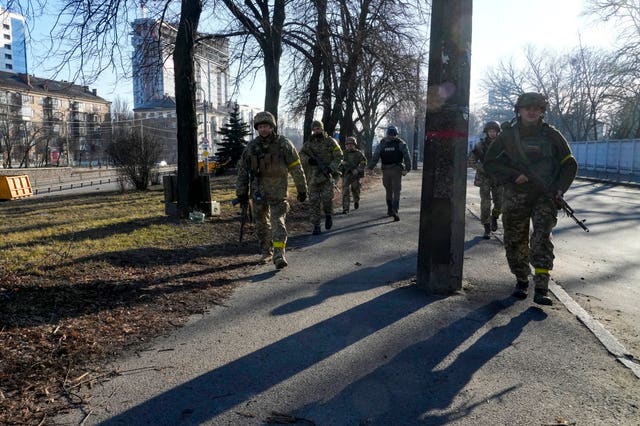 In addition to Kiev, the Russian assault appeared to be focused on the Ukrainian coastline, which stretches from the port of Odessa on the Black Sea in the west to the port of Mariupol on the Sea of ​​Azov in the east. .

If Russian troops were successful, Ukraine would be cut off from all of its seaports, which are vital to its economy.

In Mariupol, Ukrainian soldiers guarded bridges and blocked people from the shore, fearing that the Russian navy would launch an assault from the sea.

Fighting also raged in two territories in eastern Ukraine controlled by pro-Russian separatists. Donetsk city authorities said the hot water supply to the city of around 900,000 people had been suspended due to damage to the system from Ukrainian shelling. 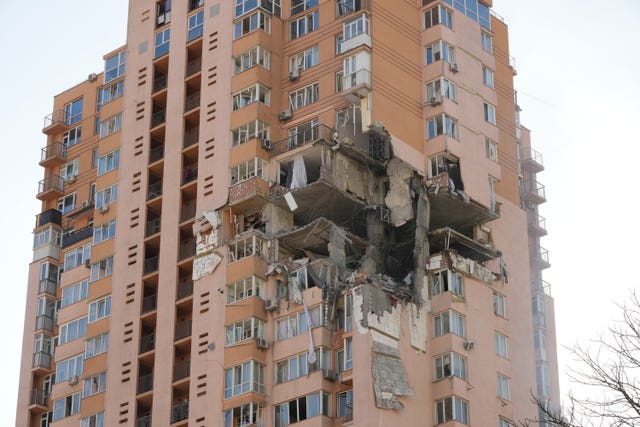 The US government urged Mr Zelensky to evacuate Kiev, but he refused the offer, according to a senior US intelligence official.

In a video recorded in Kiev, Mr. Zelensky said: “We are not going to lay down our arms. We will protect the country.

“Our weapon is our truth, and our truth is that this is our land, our country, our children. And we will defend all of this.

The conflict has driven thousands of Ukrainians from their homes in search of safety.

UN officials said more than 150,000 Ukrainians had left the country for Poland, Moldova and other neighboring countries and estimated that four million could flee if fighting escalated. 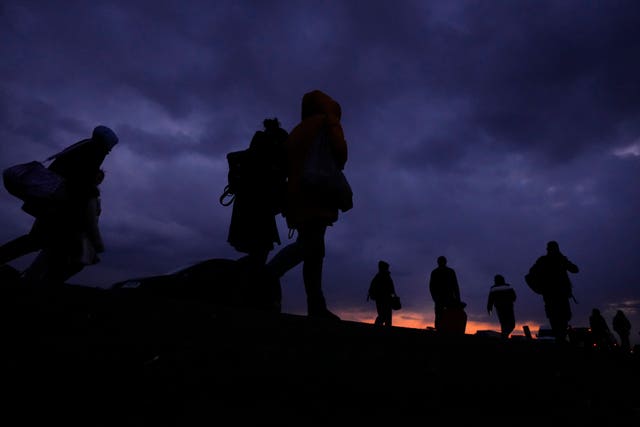 Kyiv officials have urged residents to take shelter, stay away from windows and take precautions to avoid flying debris or bullets.

The US military has announced $350m (£261m) in aid to Ukraine, including anti-tank weapons, body armor and small arms.

Germany also said it would send anti-tank missiles and weapons to the country, in a significant change.

The United States and its allies have been beefing up troops on NATO’s eastern flank, but have so far ruled out deploying troops to fight Russia. 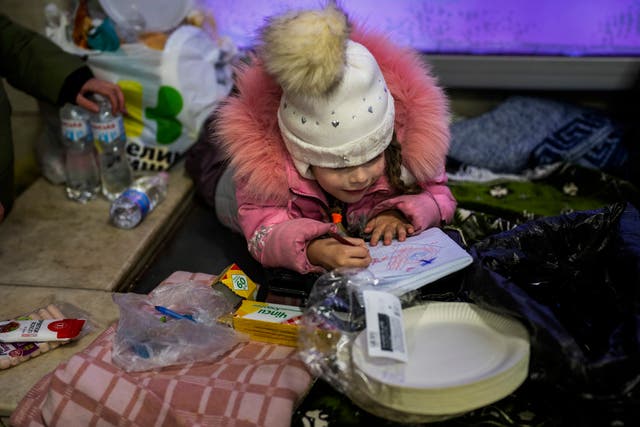 Instead, the United States, the European Union and other countries imposed far-reaching sanctions on Russia, freezing the assets of Russian companies and individuals, including Mr Putin and his Minister of Foreign Affairs. Foreign Affairs, Sergei Lavrov.

Among the possibilities that remain to block the Kremlin’s access to hundreds of billions in cash are the sanction of the Russian Central Bank and the removal of Russia from the Swift international payment system.

Dmitry Medvedev, the deputy head of Russia’s Security Council, has warned that Moscow could respond to sanctions by withdrawing from the latest nuclear arms pact, freezing Western assets and cutting diplomatic ties with Western nations.

“There is no particular need to maintain diplomatic relations,” Medvedev said. “We can look at each other through binoculars and sights.”